So Murray and I have been working a lot on our kitchen and it is nearly done. Sometimes it’s strange to reconcile real life inside our home, and real life outside our home. I love getting domestic, gardening and growing my own food, sewing and just tidying up. But for a second today I was getting a little tour-sick…every now and again I miss being on tour, I look forward to going to England, going to Pret and Muji. Like who is really me: tour Natalia or home Natalia? We are definite beings, her and I.

I am really fond of TV chef, Gordon Ramsay. Hell’s Kitchen is entertaining enough for a reality show, but Ramsay’s Kitchen Nightmares really gives a lot more. I have a lot of respect for Chef Ramsay: he’s a hardass and doesn’t take any bullshit. I like his style. I’m finding it inspiring in an everyday sense, that being nice will only go so far. I watched an episode tonight where the owner of the restaurant was too nice to fire his useless chef, so his business was crumbling. And Chef Ramsay was kicking his ass to do something about it. Anyway, the restaurant has probably gone down in flames since the show aired. But Chef Ramsay, I salute you! Shrewd on the business side, and totally pragmatic on the food side, he’s a proper genius.

Jamie At Home is pretty good too, but he’s a bit too fussy. Like yeah right I could grow letttuce between the stones in my backyard, or have enough time to groom, feed and water a complete herb garden. Its a bit bougey. He means well, and totally gave his show this indie-rock vibe. It’s pretty hilarious. Anyhow Jamie Oliver’s show probably contributed to my UK-homesickness: there’s no way gardening could happen that easily in Montreal. We have like a two-month growing season. I could get into the temperate climate in the UK: they’ve got giant rosemary and lavender over there. 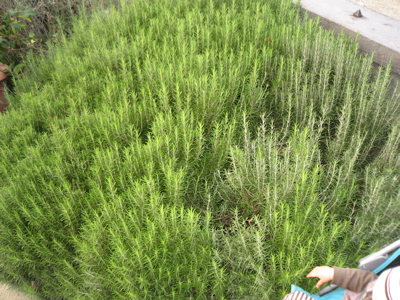