As I was reviewing my Facebook profile today, I decided to remove “Barack Obama” as one of the pages I was following. I thought: “Obama-mania is over, he won, he’s in the juice, and I’m Canadian so I should move on.”

But through a series of random events (clicking on Mark Slutsky’s profile, then trying to see a YouTube link he posted of two angry camels in a car, which led me to a Russian blog), I was led back to Barack.

Or, more specifically, a whole slew of Barack-inspired portraits. I was very drawn to this first one, and if I were a little more crazy, I might consider hanging this in my house: 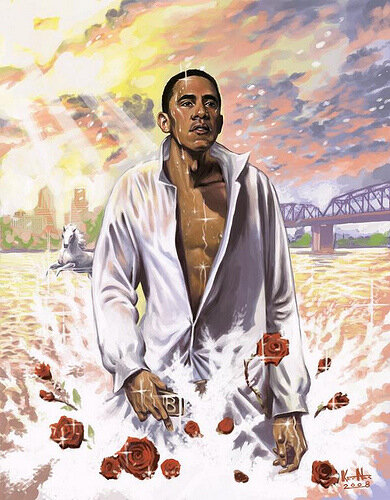 I never did see those two angry camels in a car. But this more than made up for it. Wouldn’t you agree?

One Reply to “Inspirational Portrait”