I guess its kind of a drag to come to my blog and read about people dying, but death is a pretty huge part of life. Whether we like it or not. Early this morning, across the ocean in a small rural town just East of Paris, my grandfather Charles passed away. He was always “my grandfather in France,” who I’ve visited every few years since I was a kid. He was 94 years old, and didn’t look a day over 70. His place in my family is a complicated memory: one of war, of sadness and opportunities lost, decisions made in the face of a war-torn continent.

Do I want to get in to the whole story here? It’s convoluted, it’s long, there are many characters and cross-Atlantic boat rides. Spontaneous relationships, lovelorn Allied soldiers, and slaves to the Nazi empire. I think the heartbreak of my grandfather passing is just enough for now. I’ll tell you the story another day, because it really is a good one. I’m just not up for it at the moment.

On an historical note, the summer of 2010 marked the 70th anniversary of France’s Appeal of June 18:

The Appeal of June 18 (L’Appel du 18 Juin) was a famous speech by Charles de Gaulle, the leader of the Free French Forces, in 1940. The appeal is often considered to be the origin of the French Resistance to the German occupation during World War II. De Gaulle spoke to the French people from London after the fall of France. He declared that the war for France was not yet over, and rallied the country in support of the Resistance. It is one of the most important speeches in French history.

Marking this anniversary, France recognised all of its surviving WWII veterans, including my grandfather, with an honorary diploma from the country’s Secretary of State for Defence. Charles was one of 13 living veterans honoured in his town of Gretz-Armainvilliers. I am proud of my grandfather, who I just called Charles, and who my daughter referred to as “Great Grando.” He is in my heart always.

Out of the blue, my daughter decided that she wanted to wear this little gold necklace that Charles had given to her when she was born. She has been wearing it since Friday. Before that it has literally been sitting in a jewelry box for months. My kid is more spiritually attuned to this universe than I might realise.

Mama2 and Great Grando are finally together. Here’s a photo he had given to my grandmother a very, very long time ago. 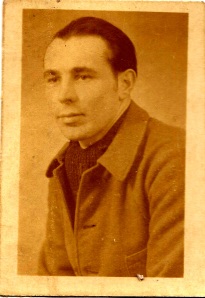 Also, one of my favourite images of Charles from the 1940’s sent to me by my cousin Jean-Marc: